The Salento is always on the podium, whatever the ranking. Between the monuments, the most absurd of Italy, Sculpt wins the second place with the the“dwarf pea”, have fun in the contest “Monumentellum” created by the radio program of Radio 2, The provincial of Pif, Michele Astori. The work-made-from’artist, Giuseppe Castellano is entitled “Mother Earth”, ranks among the most original, curious and entertaining, but also capable of tell l’authenticity of the Italian province. 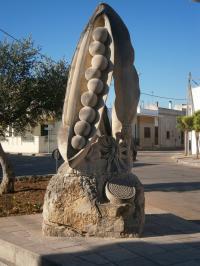 Among the most exhilarating monuments scattered throughout the Boot, were also Hedgehogs Gallipoli but did nothing against the countryman “dwarf pea”, work in pietra leccese " which has won the “Critichellum”, the critics prize “for his sense of fertility” by the art critic Francesco Bonami. Although on the podium, the dwarf pea of the Salento is not able to beat the “salama da sugo”, the monument, which is located in Madonna Woods, in the province of Ferrara.
The dwarf pea of Zollino is a particular local ecotype of pea a native of this area of the Grecìa Salentina where to find a harmonious balance with the climatic conditions and podologiche that enable plants to obtain seeds from the organoleptic characteristics and cooking excellent. Its cultivation is, however, also widespread in the neighbouring territories, all in the Lecce. The product is aimed at consumers who seek particular tastes, authentic and obtained with agrotecniche traditional.

If you want to spend your next holidays in Salento, discover our offers of houses nearest to Zollino in area of Otranto  and the area of Lecce.
< Prev: Holiday in Puglia in the bus? FlixBus is the possibility
Copertino, new life for the HOUSES CLOSED: Next >