What to see in Lecce in 3 days?

It is not only a point of transit for those who proceed to the south towards the beautiful beaches of Salento. Lecce is, and should be, a city is a must-see during a holiday in Puglia worthy of the name. Lecce is a living room elegant, aristocratic and sly. A canvas d’an artist with brush strokes d’amber on buildings, street music, embroidery on the façades of the churches: a walk to do necessarily with the nose all’s up to you. Rose windows and frames seem to take a life shaped by the friability of the stone of lecce, the kind stone, a limestone which is tender and golden, which lends itself very well to working with the stonemason. The whole historic centre is full of examples of the working of this stone, with a Baroque style that has earned l’s nickname, the Florence of the South. 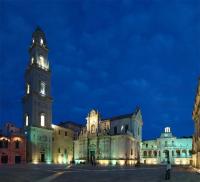 A WALK IN the HISTORIC CENTRE

Once you set foot in the center of Lecce – for your convenience you can start from one of the three historical gates of the city, Porta Rudiae, Porta Napoli or Porta San Biagio – will automatically want to explore the scenic maze of alleys and courts that weaves the ancient village. Elegant as few, the city offers a spectacle of absolute beauty that will take you to walk in time: every angle offers palaces, portals, shops, churches, courtyards, and balconies full of flowers that will make you feel all the charm of the Salento, the old town, the city where you can still breathe fresh air and kindness. Among the churches not to be missed are the Church of S. Matthew, with its unique curved facade, and the Church of St. Irene, the patron saint of Lecce until 1656.

S. Oronzo, the patron saint of the city after saving it from the plague, observes all from’the top of his column with a capital: c’is someone who takes a cup of coffee, all’open, who enjoys a gelato sitting on the steps of the Seat, those photographer l’the roman amphitheatre, with people doing their shopping and have a walk, full of envelopes and gifts. Piazza S. Oronzo is the heart of Lecce, the town`s most known and the most frequented of the capital of salento. It has an oval shape and the architectural style that is heterogeneous, the result of the passage of peoples and different sensitivities. The two protagonists of the square are certainly l’s Roman Amphitheatre and the Palazzo del Sedile, formerly the seat of the municipality.

COL NASO ALL’UP’ FOR THE BASILICA OF SANTA CROCE

With the near Celestine convent (now the headquarters of the Province) is l’s most glaring example of the magnificence of the lecce Baroque. From Piazza S. Oronzo, it comes along the street of the knights Templar, in that time it was the Giudecca. The Basilica di Santa Croce is located on a land expropriated to some jewish families, frowned upon for their social position privileged. The facade of the holy Cross will appear tutt’s a stretch, leaving you breathless. Built between the ‘500 and ‘the 600 greatest architects of salento, with l’help of skilled stonemasons and carvers. The lower portion is in the renaissance style, the upper one, dominated by the beautiful rose-window is romanesque inspired. In the rose window, between games of light and twirls in stone, you can play to find the 5 faces hidden that not everyone can see.

A PHOTO IN PIAZZA DUOMO

All’incrocio between the way of Libertines, and of via Palmieri, opens the clearing in front of the Cathedral Square, a riot d’art of the baroque, where we find the Cathedral dedicated to Sts SS. Assunta, the Bell tower, l’Bishop`s palace and the Palazzo del Seminario. Initially the square was designed as a courtyard and the evening was closed by two massive doors. Today it remains a square, small and intimate, with l’entrance only on one side, constructed of a material typical of the area, the lecce stone, which takes on particular colors of light and shade to vary the light. Beautiful by day, the Piazza Duomo becomes even more beautiful in the evening, with the’lighting.

L’the roman amphitheatre of Lecce, Piazza S. Oronzo, the most important legacy left from’the roman era, built in the II century d.C. to entertain the audience with shows and games. L’an amphitheatre that bears a’engraving with the name of’the emperor Trajan, was brought to light only at the end of the’s 800, during the excavation in Piazza S. Oronzo for the construction of a branch of the Banca d’Italy. The one visible today is only 1/3 of the original building, so great as to be able to accommodate 250 thousand people. Today, l’the amphitheatre is used as a natural stage for concerts and theatrical performances. Stop after you have seen it is a cup of coffee in a historic bar of Lecce, the caffè Alvino, who is just opposite, to sit in the open-all’open with a view of 360 degrees on the square.

LECCE TO DRINK – A DRINK IN the COMPANY

The centre of Lecce is teeming with life until late at night, and in the evening, l’atmosphere of the capital of Salento, is even more fascinating . The crossroads for those who want to stay late are the streets adjacent to the Piazzetta S. Chiara, where we travel to have a drink with friends, between a pub and a wine bar, or on the premises of The Umberto I street, in the surroundings of Basilica of Santa Croce. Beautiful places, rich d’art and charm, as well as that very popular, where you can meet new people and chat. Finger food, dj set, a chat in good company and in the tranquility of the narrow streets without traffic are the winning cards of the two premises which from time to time are a reference point for the nightlife of the place.

A WALK IN the GREEN – the VILLA COMUNALE AND BELLOLUOGO

Long avenues of greenery, flower beds, carousels and games for children. During a holiday in Lecce, especially with children, a must stop is the villa comunale: a place where you can rest after a walk in the city centre, drink and – why not – to make sport. All’interior of villa c’is also an artificial pond crossed by a bridge where you can admire often geese and ducks. L’s largest green area of Lecce, however, is the parco di Belloluogo, wide about 10 acres, near viale Taranto and port of Naples. All’interior of the park is the Tower of Belloluogo, a monument of the Fourteenth century, in the phase of recovery.

MUSEUMS – A DIP INTO HISTORY

If visitando the historic centre of Lecce, there are fans of the baroque, in the Museo Provinciale Sigismondo Castromediano, you can find a huge collection of paintings dating back to a period in history between 1400 and 1700, together with a’another collection dedicated to the middle Ages. Very interesting is the collection of attic vases, statues from the roman age recovered in the’s Amphitheatre, specializing in pottery of the period messapico. There are also a few prehistoric finds. Another reality that deserves to be seen is a must, the Historical Museum of the City of Lecce, next to the Church of Santa Chiara. All’inside a gallery with exhibits of different eras: the messapian, roman, medieval and modern.

What are you waiting for? Choose your holiday home in Lecce clicking here
< Prev: Top 10 holiday houses with garden in Porto Cesareo and Torre Lapillo
Holidays with children in Salento: 5 beautiful beaches: Next >