Summer in Salento: 10 experiences low cost not to lose

You`ve seen photos and travel tales of Salento everywhere, on social, on Facebook, on Instagram, reports of the friends that I have spoken excited. Now, finally, you are in Salento. Well, now it`s up to you.

What to do during a holiday in Salento?

If you are looking for an itinerary to visit the Salento, if you are wondering what are the most characteristic places of the area or what to do to really experience the area and take home an authentic experience, take a pen and paper.

Here is a guide on what to do, what to see and where to go during the vacations in the Salento, with the advice of those who the territory he knows very well: the local who live there all year round.

Put the alarm clock early, or pull a very late: you`ll be the first in all Italy to see the rays of the new rising sun. Otranto, just 72 km from the coast of the Balkans, is the largest city in the East of Italy. The first to greet each new day. Il faro della Palascìa, along the cliffs of Porto Badisco, is suspended in an ethereal space of silence. Under the shadow of thousands have found the answers they sought. It will be the panorama, where photographers, painters and writers are inspiration. Will be here you learn to listen to the wind. Will that to get there you cross the old cart-roads, roman roads, ancient tracks and paths along the sea.

2. Swim IN THE OASIS of the WILD - Where the sea is more blue

The beauty has no price. And, in fact, some of the most beautiful beaches of the Salento are free. If you are willing to yield something in terms of convenience and comfort, giving up for a day with the amenities of a seaside resort, you will be rewarded by a breathtaking, pristine, cleaner than ever. An option is " Bay of the Turks, a few km from Otranto, where establishments are prohibited to preserve the natural landscape. In the extreme south, instead, in the territory of Gagliano del Capo, there is one of the postcards the most beautiful of Salento, the Ciolo, a little cove with pebbles nestled in the mediterranean scrub and dominated by the a bridge of thirty feet, from which they dive and the more daring. If you are willing to walk a bit before reaching the sea, a must for your holiday in Salento will certainly be the Bay of Porto Selvaggio (Nardò). The blue is a surprise that conquers the heart, after metres of pine trees and mediterranean scrub. The sea, due to the proximity of natural sources, it is clear and cold.

3. BOAT TO THE islands - The two islands in the Salento

There are two islands, the most popular of Salento: lRabbit Island of Porto Cesareo and thethe Island of Sant`andrea to Gallipoli, both in the Ionian sea. The first, in the marine protected area of Porto Cesareo, is a paradise of biodiversity and a variety of backdrops. long and a little less than 3 km. The second, the island of Sant`andrea, is a little less than 2 km from the coast of Gallipoli, is rich in corals and is extended over an area of 50 thousand square meters. You come by boat or pedal boat.

4. AN EXCURSION TO the QUARRIES OF BAUXITE - A unique place of its kind

Cave di bauxite Otranto a true surprise of nature, the palette of colours that you expect. There is a lake of emerald green. There are rocks, rust red. Bushes and plants from the tone of the intense and brilliant. The feeling that dominates is that of being out of the world, also because there reigns an incredible atmosphere of peace. The lake was formed with water and following the abandonment of the quarry; the outstanding peculiarity of its color is due to the remains of bauxite which still remain today. A unique spectacle in its genre, a must see.

5. FESTIVALS AND CONCERT OF PIZZICA - Salento food and dance

The most famous appointment with the popular music of Salento is certainly the Night of The Taranta, but the best way to get closer to the culture of salento and experience the extraordinary hospitality of salento, it remains to attend to the many evenings of which is studded in the summer in the Heel of Italy. They are everywhere, practically every evening. The festivals are an essential appointment for those who want to taste the typical dishes of the Salento: from the sagra della frisa to that of the "puccia", passing to that of the "municeddhra" and "lu porcu pri pri", many events that in the face of a mise en place, a bit spartan, and an atmosphere very popular give your palate to the flavours of the most authentic Salento. Two appointments super recommended? The Market of gusto in Maglie, every year the first of August, and the "festival of the devil", in Galatone, with music, food and various bizzarrìe.

6. The RETURN OF THE fishing boats AT the PORT - An aperitif of fresh fish 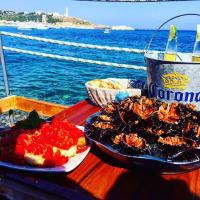 There is no fish fresher than that served and made to taste in a fish market at sunset or the very early morning. At Gallipoli, for example, is a daily ritual very much anticipated. The port, on the isthmus connecting link between the old town and the new town, it is crowded with residents and tourists alike, who welcome the return of the fishing boats and fishing boats while the fish is cleaned, seasoned with oil and lemon, and served on the stalls, before proceeding with the purchase. Delighting visually and to the palate, you can choose between a cruditèé red prawns, oysters, mussels, urchins, clams, and mussels. If, instead, the word "cocktail" makes you think of a comfortable sofa and a spectacular view of the sea, you can find it at the Barrueco, in Santa Caterina (Nardò), a bar with canopies of wood and straw overlooking the sea, at the Bar of Moro San Gregorio (Patù), the Gricò in Santa Maria di Leuca, at the Cotriero in Punta del Pizzo (Gallipoli), at the Sunny in Torre Suda, the Km0 of Santa Maria al Bagno.

7. TREKKING TO the cliffs ON the SEA - mediterranean lungs

Between the different degrees of difficulty, you will find a little bit challenging, but definitely interesting to spend a day of vacation in the Salento, especially if you love sports and contact with nature. Are some of the routes to do on foot to immerse yourself in the beauty of the Salento. For those who want to appreciate the natural beauty of the mediterranean vegetation overlooking the Adriatic sea, there is the Path of Acquaviva from Diso and comes up to the Breast of the Acquaviva di Marittima (3 km) of well-being lungs. Further south, the Trail along with Salt, in Corsano, a succession of dry stone walls, cattle tracks and terraces that frame a panoramic exception. A surprise for the children is given by the Adventure Park, in the Woods, So Zepe.

8. BREAKFAST WITH A BED AND SNACK WITH A RUSTIC street food

More than a food, an identity card, an entry is compulsory for anyone who spends his holidays in Salento. No palate should be deprived of these delights: the pasticciotto, for mouth-watering pastries, and rustic, filled pasta, tomato, béchamel and mozzarella, for those who prefer salty food, are the standard-bearer of the street food of Salento. The pasticciotto is a boat-like pastry. Tradition wants it to be stuffed with lots of delicious pastry cream, but for those who surrender to orthodoxy, there are incredible versions with nutella, the hazelnut and fruit. The rustico leccese, however, does not allow for experimentation. The recipe is that, we do not accept light versions without the white sauce, the reinvention fusion or other variants. The taste is a sin of gluttony which must be carried out until the end.

9. THE CASCADE OF NIGHT - Spectacular Leuca

The Waterfall in the night is really a unique event in its kind. At the foot of the Basilica of Santa Maria di Leuca, the nights are magical with colors, music, performances and street performers accompany the lighting of the monumental waterfall of the city, an imposing work as high as 250 meters and a vertical drop of 120 meters, the co ìn a flow rate of 1000 litres per second, which ends directly in the sea. It can be seen from the upper belvedere to keep an eye on all the surrounding landscape, or from the foot of the waterfall, to admire to the full the power. The night of ferragosto, for those who have taken a #OrPENTAG#a href="en/apulia/holidays-in-lecce/holidays-in-santa-maria-di-leuca/holiday-homes-in-santa-maria-di-leuca/">holiday home in leuca for rent, in addition to the beauty of the waterfall, there is a fireworks display of fireworks.

10. A VISIT to the WINE CELLARS

If you want a distillation of the culture of salento, the wine produced in this area will give you all the answers you seek. The excellence of the native call Wine, Vineyard, Primitive, Random and Malvasia and Bianca di Lecce. And made available to connoisseurs and enthusiasts, there are plenty of wineries that offer tours (also guided and free) in the company, with product tasting and direct sale at affordable prices. In addition, and not a little, you can take home for the return of a good bottle to toast to your holiday in Salento. Waiting to come back again.
< Prev: 7 ideas for a romantic weekend in Salento
amusement Parks in Salento - here is the most beautiful: Next >