Holidays in the Salento`s vegan and cruelty-free: you can do

you Want to combine the sea and the nature of the Salento to your next holiday vegan? Find out how to do it. 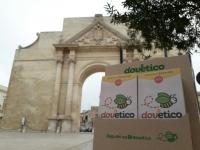 If you`re planning your next trip, in the full respect of your ethical choices and food, then the Salento is the right goal. È born from the little “Dovètico”, a guide dedicated not only to the travellers that even on holiday want to find alternatives suitable to their own life choices ethical, but also that of many people of salento who want to keep track of all the point of sales of ethical products, and vegan spread throughout the land.
The vegan choice is simple and within the reach of all, embraced now by about 1 million and 800 thousand italians, according to data from the last 2016. Therefore it is right that the trade complies, providing travellers with the opportunity of not having to bring anything, as it was until a few years ago, when we left for places known to and you suffered from particular diseases, or had chosen a particular philosophy of life.
In the Salento, homeland of the reception, there is no need to lug around a suitcase full of organic produce and vegan, because the guide was designed by the association of lecce Empathy Circus that deals with campaigns in favour of the protection of animals and the environment, has thought of everything. The guide is a liaison between retailers and buyers, the mecum quick and convenient to get in touch with the right places to enjoy vegan meals from the breakfast to the street food , and get to know the places where to find cosmetics not tested on animals, clothing made of organic cotton, candles ecological, and much more.
Dovètico is distributed free of charge, valid for one year and has a page on Facebook dedicated to them, as well as a site that is under construction.

If the Salento is the destination of your next holiday vegan for thesummer 2017, please refer to our catalog holiday-homes online for rent and choose the one that best suits your needs and book online >>

< Prev: Holiday in Puglia: trekking in the Low Murgia
THE 10 reasons why the russians are expected to visit the Puglia: Next >