From Lecce to Galatina, from Nardò, Monteroni, hatch and doors the treasures chosen by the delegation of Lecce the Environmental Fund Italian for the Days of Spring 2018. Fabulous locations and, this year, from the film. The Fai organizes every year openings extraordinary in all of Italy, of places, sometimes inaccessible, or little known, to raise awareness for the protection and promotion of the cultural, historical and architectural Beautiful Country.

For this 26th edition, the Days of Fai del Salento lecce have as a subtitle “Do it...”Set, in collaboration with the Apulia Film Commission, a great initiative to bring visitors in the places that have characterized some of the works movie shot in Puglia Lecce and province. In the places, also, you can see the show “Shots of the Cinema” by Daniele Trevisi, with photos of the scene of the film productions shot in Salento.

And then you walk in the heart of Salento, to discover the the beauty of the region that have fascinated directors and producers of all over the world. Here are the four city that they offer their treasures the days Do Spring, in the mornings and in the afternoons of Saturday 24 and Sunday 25 march 2018.

To Galatina opens the St Paul`s Chapel, which is famous as a place of the redemption of the tarantate who came to ask for grace, and the set of the documentary film “Journey to Galatina” Louis A. Santoro. The little church is nestled in the old Palace Round-Vignola dating back to 1795.

To Nardo open the Acquaviva Castle-Personè, today the seat of the The town, which is located in the centre of the town where it was shot musical - “Walking Sunshine” M. Giwa, D. Pasquini. and the the eighteenth-century Church of Santa Teresa, between the sets of the film “have you ever been on the moon?” of P. Genovese.

Going back to the Valle della Cupa, Monteroni di Lecce you open salt Roman Villa, where were filmed scenes from the movie “Latin Lover” of Cristina Comencini. 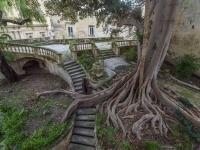 In Lecce you open the Common, Carafa`s Palace, the set of the film “A woman for a friend” of G. Veronesi, the palazzo Tamborino Cezzi, set “Mine vaganti” Ferzan Ozpetek, and always for the same the film is the the garden and the roof terrace of the Palace Marulli Famularo, the end of `400.

Closes the circuit of the visits l`Abbey of Santa Maria di Cerrate, on the provinciale Squinzano-Casalabate, which offers the opportunity to closely observe the conclusion of the restoration of the church, carved between XI and XII century in lecce stone, valuable testimony of the Romanesque.

If the program of the day Fai Spring in Lecce and the province appeals to you, book now one of our holiday homes directly from the online catalog. On the same dates, in Lecce, the the fourth edition of the Cosplay and Comics, two days to be missed for fans of the genre. Also, take advantage of this weekend to discover all the the beauties of the capital of the province. Here`s what to see in three days Lecce.

< Prev: THE rites of Holy Week
Cosplay, and Comics, for a holiday fantasy in Lecce: Next >