Carnival of Gallipoli, jokes and confetti on the shore of the Ionian

Tv! You should? This is the theme of the Carnival of Gallipoli 2018 who crosses the finish line of the 77 editions, inspired by the Gabibbo, Strip the News, and many other characters of the small screen that will give you ideas on the amount to the festival masquerade. And then there`s the character of the carnival gallipolino played by the “Titoru” from the face ruddy, prey to the gozzoviglio of meatballs, and l’inevitable flask of wine, that box in the company of his extended family to the streets of the centre of the Beautiful City. 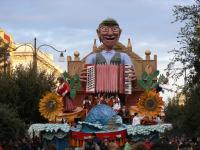 The story goes that Titoru was a the young soldier that he had hoped to return home in Gallipoli before the end of the Carnival to take in the abundance of food, wine and parties that anticipated the Lenten season. Spa, his mother, was able to extend the bacchanalian of two days, allowing thus the son of take part in it. And, in fact, Titoru, arrived on Tuesday, and fell on the headlong into the revelry, eating sausages and meatballs, tons, until the last morsel is not carried away, causing him to die together with the beloved Carnival.

The program of the Carnival of Gallipoli edition 2018

Also this edition is animated mainly from the cornerstones of the parade, the tank historical, those who work day and night by creating with papier-mâché, for long months, in order to make their wagon, tearing cheers and hilarity in two shows full of laughter, that unfold along the course of the city.

The shows are held Sunday, February 4, and Sunday, February 11,: 10 the chariots come down from the high part of the city towards the corso in Rome. The same path is accomplished starting with from 15.30, but in the company of the masked groups. After the parade there is found in piazza giovanni XXIII to dance and sing all together, the 4 February with Dances and Italy on February 11 with El Taxi.

Tuesday fat, 13 February, from 16 is held the parade of the only groups masked in the streets of centre town, and 18 on the square in front of the the church of San Fransceso, on the waterfront, there is the ceremony of the closure carnival with a pouring feast jokes and ballads, and see you next year, what you will see on the shrewd cake of the carnival gallipolino 78 years of age.

You wanted to spend the Carnival in Gallipoli, in Salento? Here is a selection of our case holiday rental in the area of Gallipoli.

If you`re already thinking of all`summer instead, please refer to our catalog with all of the holiday houses, villas with swimming pool, b&b`s, trulli and pajare for rent in Bari Leuca. Choose the one that suits you.

< Prev: Pope Francis in the Salento: here`s where to meet him
Christmas Holiday in the sweet Salento: Next >